BACKGROUND: Healthcare-associated infections (HAIs) occur frequently in neonatal intensive care units (NICUs), causing significant morbidity and mortality. Hand hygiene (HH) is an important measure to prevent HAIs and avoid pathogen transmission. The aim of this study was to assess the impact of a care bundle on HH compliance rates in NICUs in Greece.

METHODS:  A two phase (pre- and post-intervention) active surveillance mechanism for HH was established in 15 NICUs throughout the country. Observations were conducted from June 2016 to June 2018 using a data collection tool based on WHO guidelines. Compliance rate was defined as [(number of performed actions)/(number of opportunities)]x100. An intervention that included HH training as part of a care bundle for central line-associated bloodstream infections was implemented from March to April 2017 and consisted of on-site staff training, educational material, and reminders in the workplace such as posters, brochures and rulers representing ‘’The Five Moments of HH’’ and appropriate hand-washing technique.

CONCLUSIONS: The implementation of a care bundle in NICUs led to ≥10% increase in HH compliance rates in 1/3 of units indicative of difficulties in changing behavior in the workplace. Our data shows that consistent surveillance, staff training, and the use of reminders may result in significant improvement in HH compliance rates. 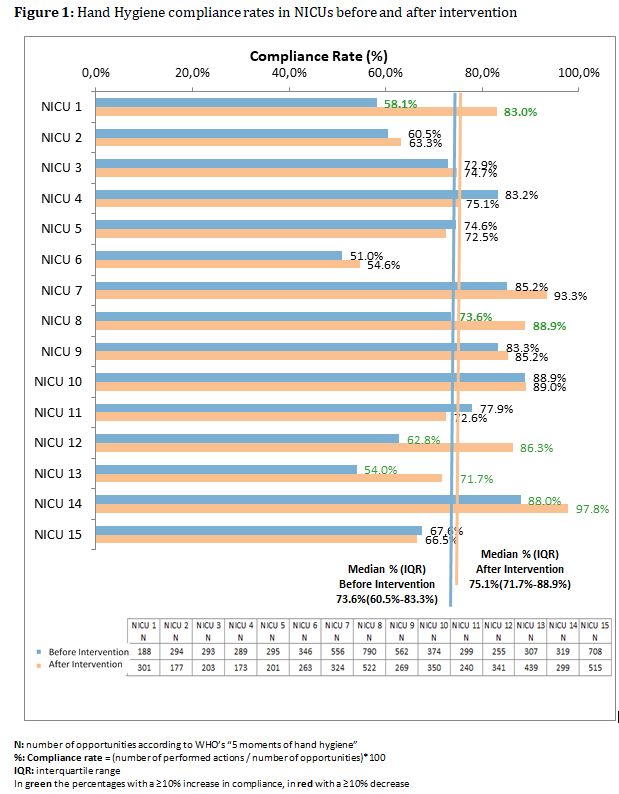