BACKGROUND: Hospital-acquired infections (HAIs) are a major cause of morbidity and mortality in pediatric patients in Europe, but surveillance in this population is scarce and not systematic. An electronic survey was created and disseminated in order to gather data on the surveillance of pediatric HAIs in Europe, with the ultimate goal of creating a multinational collaborative consortium to design and implement a unified European surveillance mechanism for pediatric HAIs.

METHODS: RANIN-KIDS (Reducing Antimicrobial use and Nosocomial INfections in KIDS) is a collaborative European effort that aims to create a unified surveillance mechanism for pediatric HAIs and antibiotic use in Europe and to implement interventions to prevent HAIs and to promote antimicrobial stewardship (ASP). In December 2018, an electronic survey that included questions on HAI surveillance and prevention practices was created and disseminated among members of the RANIN network.

RESULTS:  18 teaching hospitals from 11 countries submitted data. All but two reported having formal infectious diseases (ID) teams. Only 1 reported having no infection control (IC) team. Surveillance programs for HAIs were reported as follows: CLABSI 50%, CAUTI 33%, and VAP 39%. Only 22% reported having surveillance programs for hospital-acquired viral infections (Table 1). Hand hygiene practices were monitored by 67% of hospitals. In almost 40% of hospitals, information related to multidrug-resistant organisms carriage is unavailable in at least half of transferring patients.

CONCLUSIONS: Preliminary results on HAI surveillance practices showed that while the majority of hospitals surveyed have ID teams and IC nurses, surveillance of HAIs is significantly lacking. The results of this survey will be used to inform the creation of a unified surveillance mechanism for pediatric HAIs in Europe and to design preventative interventions. 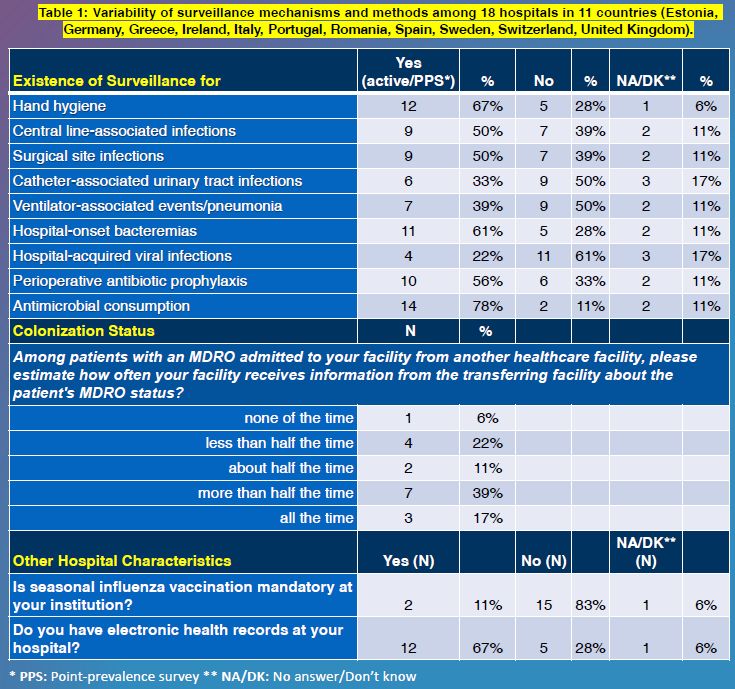