BACKGROUND AND AIM: Central Line Associated Bloodstream Infection (CLABSI) is an important cause of mortality in neonates who are critically ill. Many are caused by multi-drug resistant organisms (MDROs) which results in treatment failure [1]. Excessive exposure to antibiotics is thought to increase the risk of colonization or infection with MDROs. The burden of CLABSIs caused by MDROs in hospitalized neonates in Greece is unknown. Our study examined the prevalence of MDRO pathogens causing CLABSIs in neonates.

METHODS: A 22-month prospective surveillance study was conducted in 10 NICUs, including public and private, as well as pediatric and adult hospitals in Greece. CLABSIs were prospectively identified using the National Healthcare Safety Network definition [2]. Microbiological data regarding the pathogens were isolated from blood cultures of neonates with CLABSI were recorded.

RESULTS: Among 38 CLABSIs, Gram-negative bacteria were responsible for 16 (42.1%) of the CLABSIs, while 15 (39.5%) and 7 (18.4%) CLABSIs were due to Gram-positive bacteria and fungi, respectively. Enterococcus spp. were isolated most frequently (23.7%), followed by Staphylococcus spp. and Candida spp. (15.8%) (Fig. 1). All Staphylococci were coagulase negative. 22.2% (2/9) of Enterococci spp. were found vancomycin resistant and 9/16 (56.3%) of the Gram-negative bacteria were resistant to third generation cephalosporins (likely ESBLs). Carbapenem resistance was seen in 1/16 (6.3%) of Gram-negative isolates.

CONCLUSIONS: Many of CLABSIs in hospitalised neonates in Greece were caused by resistant organisms. These findings call for rapid and effective adoption of infection control and antimicrobial stewardship strategies to prevent CLABSI and halt the further emergence and spread of MDROs. 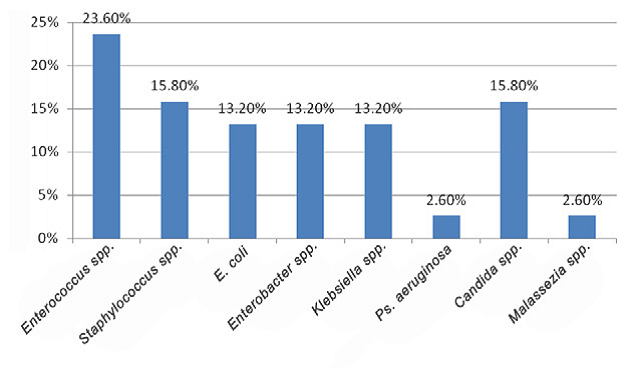